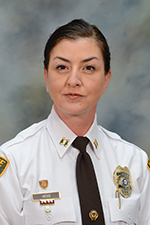 Captain Melissa Webb from the St. Louis County Police Department was appointed in September as the new Commander of the Bureau of Transit Police, a role that she has embraced with enthusiasm, energy and compassion.

After putting herself through the St. Louis Police Academy, Webb joined the department in 1995, beginning her career with the South County Precinct. Over the next 20 years, she served in the Bureau of Crimes Against Persons, Affton Southwest Precinct, Bureau of Communications, Domestic Violence Unit, West County Precinct and the Bureau of Crimes Against Property. She earned various promotions along the way, growing her leadership abilities and strengthening her skills in field training, communications, consensus building, contract negotiations, process management and more. She was promoted to captain in 2016, and assigned to serve as Commander of the Affton Southwest Precinct, her second assignment to that precinct and, coincidentally, the community where her family lives.

“I think that my entire 25 years and everything that I’ve experienced in every facet that I have worked in this department has led me to this position with the Bureau of Transit Police,” says Capt. Webb. “I’m bringing every bit of that here to make this the best collaborative effort that we can.”

Webb says when she was involved in neighborhood policing during the early years of her career, and specifically her time in Affton, it taught her a lot about collaboration and community.

“We all understood that we all had to be part of the solution and make our community safe and well-rounded, and then I instilled that in my officers,” says Capt. Webb. “It was like you’re not an officer that works here. You’re part of this community. And it would be nice to see that happen here at MetroLink, because we have to look at the MetroLink as a community.”

Capt. Webb adds that she certainly sees Metro Transit that way and considers the transit bureau, MetroLink staff and operators, the Transit Security Specialists, the G4S security guards and individual riders all as part of the MetroLink community.

To connect with that community, Capt. Webb frequently rides MetroLink with the patrolling officers and also engages in various community outreach efforts. She’s particularly passionate about supporting veterans and thankful for the support of Hero’s Care, which supplies care products her team can distribute to veterans and homeless individuals in need.

As she settles into her new role, Capt. Webb has one overarching goal. “I want to continue in the efforts of my predecessors by building and expanding on their initiatives to make this system safer every day. I also bring new ideas to the table and look forward to fine tuning and implementing them. I want our riders to see and know that the officers from the task force are here and we’re all part of one team and one community.”

Capt. Webb earned a Bachelor’s Degree in Business Management at Webster University and is a graduate of Ursuline High School. She also is an avid yogi and motorcycle rider. She and her husband have one son who is a recent college graduate.

Always Be Recruiting: Vern and Tony

Scam of the Week: Exploiting the Coronavirus – Supermarket Spoofs