New career dreams may be taking flight for 120 young women from more than a dozen area high schools who participated in the 2nd annual Girls in Aviation Day Oct. 4, at St. Louis Downtown Airport in Cahokia, Ill. As part of their introduction to careers in aviation, the teenagers in grades 9 through 12 flew planes in high-tech simulators and climbed into the cockpits of various aircraft for an overview of the instrumentation. Saint Louis University’s Parks College of Engineering, Aviation and Technology, in partnership with Women in Aviation International (WAI), hosted the event, drawing 20% more students than during the inaugural year to the airport near downtown St. Louis for an interactive introduction to the aviation field.

“We started this event last year to attract female high school students to help expose them to all the opportunities in the aviation industry,” said Amy Preis, Outreach Coordinator for the Department of Aviation Science at Parks College of Engineering, Aviation and Technology. “It’s really about getting industry connected to these students. There’s lots of learning, lots of inspiration, and we hope the girls take away something for their own future.” 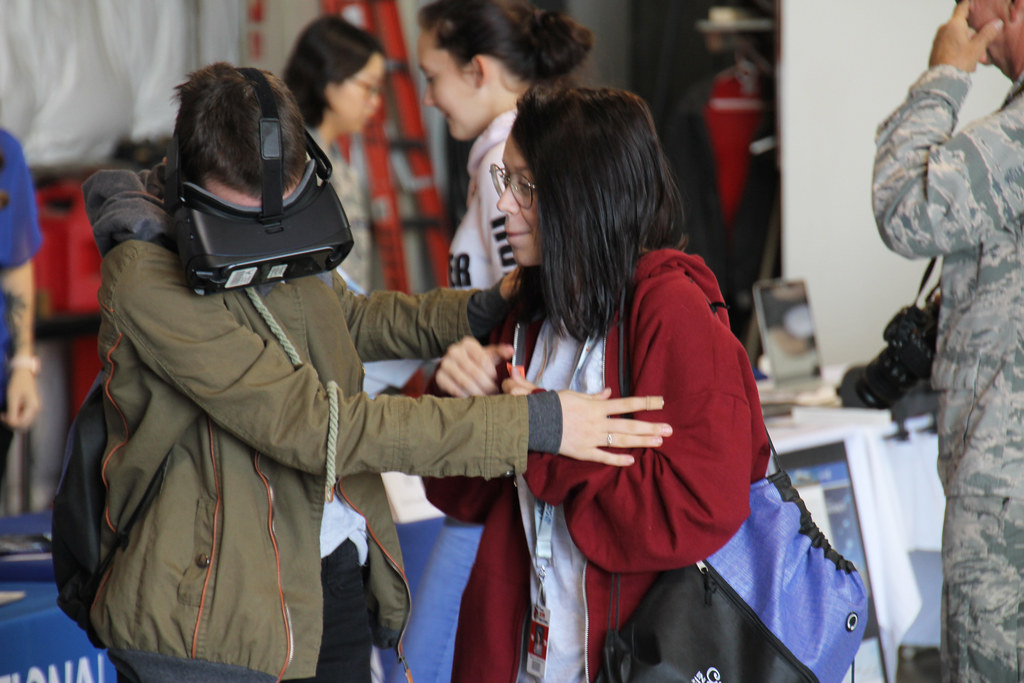 In addition to the hands-on activities, the event featured a career expo, where the students had the opportunity to talk with representatives from 21 companies and organizations in the aviation industry about various job opportunities and the paths to take to secure those types of positions. AeroNav Data, Gulfstream, Ideal Aviation, Take Flight Girls, Inc., the Greater St. Louis Business Aviation Association (GLSBAA) and The United States Air Force were among the companies and organizations participating.

Nova Ulmer, a 9th grader at Roosevelt High School, was impressed by the diversity of opportunities represented through the Career Expo portion of the event.

“It’s really interesting that within the aviation industry there are many of the same jobs you could normally get, but they are on an airplane or at an airport,” said Ulmer.  She ended up winning one of the three discovery flights in a Saint Louis University training aircraft that were raffled off, so she will now have the opportunity to take to the skies to see if that further inspires her interest in the aviation field.

Ulmer and the other students on hand were among an estimated 20,000 girls worldwide who took part in Girls in Aviation Day 2019.  The goal of events like Girls in Aviation is to introduce more young women to the field of aviation, where there is currently tremendous demand for pilots, engineers and various other positions. WAI reports that, over the past two decades, the number of women involved in the aviation industry has steadily increased and women can now be found in nearly every aviation occupation, however, the numbers remain small by comparison. Women pilots, for example still, represent only six percent of the total pilot population, underscoring the potential opportunities that exist for more women to enter the field. But the event also recognizes that not everyone has the desire to be a pilot, so organizers engaged a keynote speaker who could help to highlight the myriad of other opportunities in the industry.

Cartiay McCoy, Corporate Communications Manager for Trans States Holdings, which is comprised of Trans States Airlines, Go Jet Airlines and Compass Airlines, talked about her unconventional path into the aviation industry. She initially thought she wanted to be in broadcast journalism and pursued a degree in media and communications, which launched her career in the communications field. She started out in book publishing and the non-profit sector and transitioned to entertainment PR, all of which helped McCoy to hone her skills and ultimately landed her in the corporate communications department at the regional aviation company. She also called attention to other opportunities at Trans State Airlines and other aviation companies, including positions in maintenance, human resources, accounting, purchasing, crew scheduling, and many other sectors, noting that some of the positions even offer signing bonuses as companies strive to recruit people into the industry.

“This is a great day for young women to explore the field of aviation,” said McCoy. “We’re here to expose girls to careers in the industry and careers in the cockpit, and my message to those attending today is that there is a world of opportunity in aviation.”

A panel discussion with current aviation students and flight instructors gave the students an opportunity to hear from other young women who were in the early stages of or embarking on a variety of careers in the aviation industry. They encouraged the students who were interested to take a couple of discovery flights to see if it ignited their passion and to find mentors to network with. They also highlighted the importance of getting enough flight hours to become a certified flight instructor, which can be a big step toward landing a first job in the industry.

“The various aircraft on the ramp out there are our classroom three times a week,” noted panelist Christina Connell, a SLU aviation student.

Another panelist noted that her interest was actually in the opportunity to fly drones, as such unmanned aircraft systems will become increasingly more common in the future. Drones were also the focus at one the expo tables, where Srikanth Gururajan, Ph.D., Assistant Professor of Aerospace Engineering at SLU, highlighted the work his students are doing to make drones safer.

St. Louis Downtown Airport Director Erick Dahl was pleased to see such a great turn out for the event at the airport, which is the longtime home of Parks College.

“It’s terrific to host this event and see the increase in attendance over our inaugural event last year,” said Dahl. “It can only help in the effort to grow the future generation of aviation professionals.”

BSD Board of Commissioners to Meet Virtually on April 23