Mavrogeorge has served as the fire chief at St. Louis Downtown Airport since 2008 when he was hired to establish a fire department at the airport. The airport which is located in close proximity to downtown St. Louis is the third busiest general aviation airport in the State of Illinois behind O’Hare and Midway Airports, and the second busiest airport in the St. Louis region.

Mavrogeorge first received the initial designation as Chief Fire Officer by the Center for Public Safety Excellence, Commission on Professional Credentialing in 2013.  At that time, he was recognized for his experience, education, professional development, professional contributions, association membership, community involvement and technical competencies. 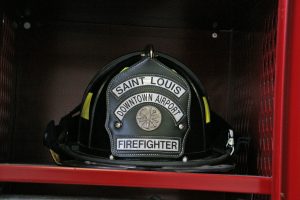 To receive redesignation, the Center for Public Safety Excellence, Commission on Professional Credentialing, recognized Mavrogeorge for demonstrating a high level of competence as witnessed by his peers, for documenting continued professional, educational, technical and community service achievements, and for fulfilling prescribed standards of performance, ethics and conduct required for a Chief Fire Officer.

The redesignation is a symbol of excellence and professionalism in the firefighting field. The requirements are set at a very high level and that is why there are only 1,146 fire personnel officers around the world who have received this honor. To put that into perspective, there are 1,200 fire departments alone in the State of Illinois.

“To be placed in that outstanding group says a lot about what Chief Mavrogeorge brings to St. Louis Downtown Airport every day and speaks volumes about his dedication and service to the community,” Erick Dahl said. Dahl is the Executive Director at the airport.”

“We congratulate Chief Mavrogeorge for this prestigious achievement and are very fortunate to have someone with his experience, skill set and knowledge at the helm of the St. Louis Downtown Airport Fire Department,” said John Nations, President and CEO of Bi-State Development.

Mavrogeorge said, “I owe it to Bi-State Development and St. Louis Downtown Airport to be the best fire chief I can be for them.” 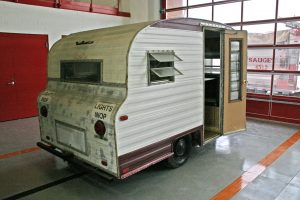 Mavrogeorge is the Chairman of the Illinois Fire Services Association and serves on various state and national committees including the International Association of Fire Chiefs Emergency Management Committee, the Executive Board of the Illinois Fire Chiefs Association, Legislative Committee Chairman and Alternate Member of the Illinois Terrorism Task Force, the Office of the State Fire Marshal Airport Firefighter State Certification Advisory Committee, the Illinois Mutual Aid Box  Alarm System Incident Support Team Committee Co-Chair, and the State of Missouri Type III Region C Incident Management Team. Mavrogeorge has been an instructor at the University of Illinois Fire Service Institute since 2005. He is active in his community including serving as a member of the Board of Trustees in New Baden, Illinois where he is chairman of the Public Safety Committee.

He quickly established the airport’s first fire department in a hangar on the airport property. The structure had no heat and no plumbing. The fire house communications equipment was housed in a tiny 50-year old travel trailer which was parked in the hangar.

In January 2011, Bi-State Development, Nations, Mavrogeorge and others celebrated a major airport milestone with the dedication and opening of the $5 million Airport Fire Station and Emergency Management Facility. With 8,500 takeoffs and landings at St. Louis Downtown Airport every year, the airport fire department is qualified, positioned and prepared to respond to aircraft rescue and firefighting situations that involve aircraft ranging from Boeing 737 charter flights to personal ultralight planes. 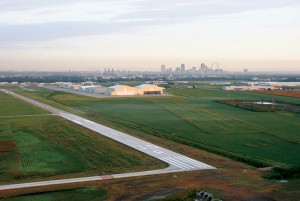 St. Louis Downtown Airport has a rich history, opening in 1929 as the Curtiss-Steinberg Airport. Pilots such as Charles Lindbergh, Jimmy Doolittle and Amelia Earhart flew in and out of the airport in the 1930’s because it was one of the few airports that had paved runways. The airport closed in 1959 and Bi-State Development purchased it in 1964. Bi-State Development reopened the airport in 1965 and has expanded and improved the airport over the last several decades with a new control tower, widening and lengthening the primary runway to support large aircraft like the Airbus 320 and the Boeing 757. The airport serves professional sports teams, political and business leaders, entertainers, and hundreds of general aviation pilots. St. Louis Downtown Airport generates more than 3,700 jobs for the southern Illinois and eastern Missouri region and provides a regional economic impact of $584 million. The airport, which is located on approximately 1,000 acres in Cahokia, Illinois and Sauget, Illinois, is home to 26 businesses, including Jet Aviation—an international aircraft maintenance and services company—which operates on 60 acres of the airport property.

BSD Board of Commissioners to Meet Virtually on October 14

Bi-State Development Welcomes New Member to Board of Commissioners