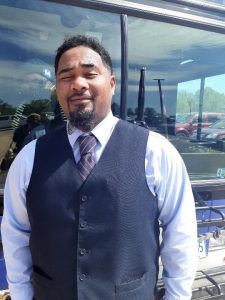 It is no secret that we have plenty of heroes here at BSD, including our operators who work at Metro Transit. They have been here on the front line, working hard throughout the entire pandemic, and they continue to work hard to ensure our customers get to their destinations in a safe and timely manner. We greatly appreciate each and every one of them. While he doesn’t deem himself as a hero, we have at least one team member who went above and beyond this month to help make a difference in the community. Nicholas (Nick) Autoomp is an extra board MetroBus Operator at the Illinois Bus Facility. He was driving along the #8 Alta Sita route in East St. Louis, Illinois, on a recent Saturday (April 17) when he noticed something unusual. After stopping and looking in both directions before he crossed train tracks, Nick looked to his left again and saw a toddler sitting in the field all alone, near a gated subdivision. Remembering what he learned in training, to be observant, Nick immediately stopped his bus, hopped off, ran over and picked up the young child. He asked the boy if he wanted to ride with him and the child smiled. As he was carrying the toddler onto the bus, a motorist who had also observed the situation, pulled up and asked to take the child, but Nick said no thanks. He wrapped his coat around the toddler and hit the panic button on the bus, which alerted Bus Dispatch. He explained the situation and Bus Dispatch called the St. Clair County Sheriff’s Department. While Nick waited for deputies to arrive, he gave the child some bottled water and chips from the lunch he had packed. A deputy arrived shortly and wrapped the toddler in a blanket, and placed him in his patrol car. Nick said, “It was heart breaking to see that child all alone. I have a daughter who is a little bit older than this child. The bus is a safe haven and I wasn’t about to give the child over to a stranger after picking him up.” He said, “I am not a hero. I was just doing what I thought was the right thing to do.” He often thinks about this little boy and hopes he is doing better.

Nick has been with us for five years. He said, “I love my job and I appreciate the knowledge that was shared with us when we were in training.” As an extra board operator, he enjoys the variety extra board assignments bring every day, including operating on special assignments or filling in for his colleagues who take the day off. He said, “Each day is a new beginning and it’s a great experience. You get to meet different people and enjoy the weather, even the snow. It can’t get any better than that.”

Prior to joining Metro Transit, Nick worked for six years in the Maintenance Department at the East St. Louis Housing Authority. Nick is an outdoorsman and likes to go fishing, to the movies, traveling and working on muscle cars. He plans to get back to those hobbies once the pandemic is over. In the meantime, he’ll continue to do other fun things like flying kites with his three children.

BSD Board of Commissioners to Meet Virtually on April 23