Hundreds of area residents gathered October 7 with representatives of Bi-State Development (BSD) and Metro transit, the Federal Transit Administration, and elected and civic leaders from Illinois and Missouri on the top deck of the Eads Bridge to celebrate the completion of the first full-scale rehabilitation of the 142-year-old Eads Bridge.

The historic bridge played host to a community celebration to commemorate this significant milestone. The East St. Louis Sr. High School Flyer Marching Band and University City High School “Golden Explosion” Marching Band marched from the east and west side of the bridges to join at the center of the bridge, where they opened the festivities with a wonderful rendition of the National Anthem. Guests then heard from a distinguished group of speakers who highlighted the comprehensive renovations made to the historic structure, as well as the critical role the Eads Bridge plays in the region’s transportation system. The official program was followed by additional live music by the bands and the opportunity to purchase food from several local food trucks, while others participated in tours on MetroLink to get an up-close look at the work that has been done to rehabilitate and preserve this vital connection between Missouri and Illinois.

In his opening remarks, John Nations, President and CEO of Bi-State Development, which co-owns the bridge with the City of St. Louis, called attention to the significance of the project.

“At the original dedication of the Eads Bridge on July 4, 1874, James B. Eads declared that the bridge would endure, just so long as it continues to be useful to the people who come after us,” said Nations. “He could scarcely have imagined that after 142 years of changes in society, in our region, in our landscapes and in our patterns of travel and movement, his bridge would still have a critically useful function for our region, our states and our country.”

As Chairman of the Board of Bi-State Development, David Dietzel highlighted how BSD is entrusted with some of the region’s most important infrastructure and its most important services.

“It is always a great pleasure to have the opportunity to deliver projects like this that are so important for our region,” said Dietzel. “Today, we are very proud to stand here with our partners to celebrate one of the most significant and complicated projects, the rehabilitation of the historic Eads Bridge.”

The Eads Bridge is indeed a storied structure. It is the oldest bridge still in operation across the Mississippi River and was the largest bridge constructed at the time it was built. After almost a century-and-a-half of use, the $48 million, comprehensive rehabilitation project was necessary to extend the life of the bridge for another 75 years so it can continue to carry vehicles, pedestrians and MetroLink trains across the river, providing a critical link between downtown St. Louis, Mo., and East St. Louis, Ill. It is the only connection for MetroLink between the two states, carrying 300 MetroLink trains each day.

St. Clair County Board Chairman Mark Kern, touched on the fact that the Eads Bridge was the first bridge ever built over the Mississippi River to connect St. Louis, Mo., with St. Clair County, Ill., “This first physical connection created here, between these two states in 1874, perfectly symbolizes what we think of now as our combined, bi-state region. Because, not only are we physically connected, but our economic growth and our successes are also connected. It always has been,” said Kern.

MetroLink continued to operate across the bridge while the rehabilitation work took place over the past four years, and Metro Transit Executive Director Ray Friem recognized the exceptional team that orchestrated the careful planning that helped minimize the project’s impact on passengers and for commuters crossing by car.

“The team was able to achieve a continuous operation and a beautiful restoration of the bridge,” said Friem. “We kept the train moving over this beautiful river we are standing on. During the process, we had to overcome many unknowns. It was a 140-year-old bridge, with different technologies that had inaccurate drawings. I want to take a moment to recognize the people who made this possible. Today, we celebrate you, your accomplishments, your skills, and your courage to work high above this raging river in order to unify a region, unite two states and build this bridge to and for the future.” 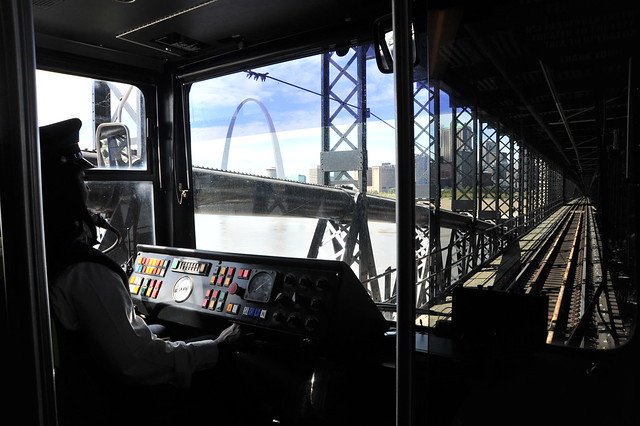 The crews working on the rehabilitation of this true engineering marvel encountered some challenges of their own, which came as a result of working on 19th century structure with a number of unknowns that could only be uncovered once the project team started to get to work. Crews not only had to overcome working with an unknown type of alloy, but also on how to reuse or fabricate handmade pieces from the 1870s. Through this landmark project, support steel that dates to the 1920s or older has been replaced, and the entire superstructure has been blasted and repainted. The MetroLink track system has also been upgraded, including rail, ties and the installation of new Overhead Conductor Rail, making Metro one of the first transit systems in the nation to use this state-of-the-art technology to power the trains more efficiently and reliably.

The general contractor was St. Louis Bridge Construction Company. TranSystems was the design engineering firm on the project and Modjeski and Masters provided the project management oversight.

One worker lost his life in July 2015 when a towboat struck the Eads Bridge. The October 7th program remembered James Pigue who was employed by a subcontractor on the rehabilitation project.

Federal funds supported 91 percent of the $48 million project cost, with $27 million coming from American Recovery and Reinvestment Act (ARRA) funds. The City of St. Louis contributed a $4.8 million federal grant and the remaining costs were supported by local funds.

“With a project of this magnitude, funding was a critical component, and I want to commend Bi-State Development and Metro transit for securing federal funds to support 91 percent of the total cost of this project,” said Mokhtee Ahmad, Regional Administrator for the Federal Transit Administration (FTA) Region 7. “Oh behalf of the FTA, I would like to offer congratulations to the entire bridge project team.”

In all, the rehabilitation project employed painters, carpenters, ironworkers, electricians, masons and other laborers. Those types of jobs were exactly what U.S. Representative Lacy Clay, representing the 1st Congressional District of Missouri, had in mind when, in 2009, he joined President Obama and fellow congressmen in the Senate and House of Representatives to pass the American Recovery and Reinvestment Act.

“The act was created to help us rebuild crumbling roads, bridges and other important infrastructure; to help us preserve and create jobs; to stabilize and strengthen our economy,” said Clay. “The Eads Bridge Rehabilitation is a perfect example of the type of project the act was designed to support. We were able to secure $27 million in ARRA stimulus funds for the Eads Bridge Rehabilitation Project, and those funds supported the jobs of painters, carpenters, ironworkers, masons and other laborers. Those funds also helped us restore this critical piece of the bi-state region’s $1.8 billion network of transit infrastructure and preserve it for generations to come. At the end of the day, I know we can all agree that making investments to support jobs and create economic opportunities for our communities, and making investments that address the growing crisis we see with aging, neglected bridges and roads, are the types of investments we can all be proud of and we can all support.”

Comments from U.S. Representative Mike Bost, of the 12th Congressional District of Illinois, summed up the overall sentiment expressed during the event. “This is an opportunity and this shows the collaboration that does occur between Illinois and Missouri, between East St. Louis and St. Louis, between eastern Missouri and southern and western Illinois,” said Bost. “These types of projects are not just beneficial for the St. Louis region, but for the United States, to keep the flow of commerce. The community worked together to make sure these bridges and thoroughfares stayed open to allow that commerce to occur. That is what it is really all about. We now know, in the future, the things we need to do to keep commerce going well.”