Bi-State Development (BSD) hosted Freight Summit 2016 on April 27, which served as the official launch of the St. Louis Regional Freightway, BSD’s newest enterprise and the culmination of several years of study and regional planning aimed at capturing a share of the significant increase in freight volume expected over the next 25 years.

Summit attendees were among the first in the region to learn about the St. Louis Regional Freightway’s marketing, public advocacy and freight development plans – the strategy developed to establish the bi-state region as one of the premier multimodal freight hubs and distribution centers in the nation.   Preliminary recommendations for major infrastructure improvements and potential funding sources also were shared.   The recommended projects and other materials from the launch can be found on the St. Louis Regional Freightway’s website, TheFreightway.com, and it provides a one-stop comprehensive data experience for prospects evaluating the region for investment.

The keynote speaker for the launch event was Gregory G. Nadeau, Administrator of the Federal Highway Administration (FHWA). He oversees the $43 billion Federal-aid Highway program and is charged with implementing the highway portions of the recently-enacted “Fixing America’s Surface Transportation” (or “FAST”) Act – including a new freight program.

Slideshow: View photos from the Freight Summit 2016 event, below. 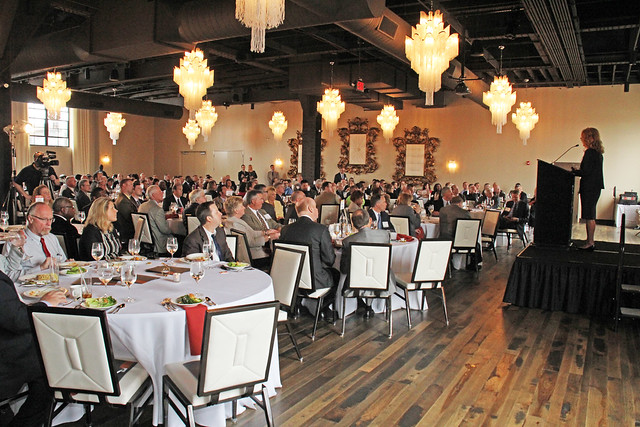 Approximately 200 people including multimodal representatives, regional public and private leadership, governmental representatives and corporate leaders, were on hand to hear from Nadeau. His comments addressed the direct connections between economic growth and investments in transportation infrastructure, while also highlighting how closely St. Louis’ history is linked with trade, and how perfectly positioned the St. Louis region is in the mid-section of the nation when it comes to trade. He further noted how uniquely situated the St. Louis region is as future freight movement becomes increasingly intermodal, and how important it is to be taking action now to plan for the expected future demands on the freight industry. “We need a strong transportation infrastructure in order for the freight economy to thrive,” Nadeau said.

His comments reinforce the importance of the St. Louis Regional Freightway, which has been taking shape under the leadership of Mary Lamie. She was hired as executive director of the new regional freight district by BSD in 2015, and has since been busy laying the groundwork for the official launch by bringing together public officials and competing private sectors from both Illinois and Missouri.

“I’m really impressed with the cooperation we’ve seen. The support has been unprecedented,” said Dr. Edward Hillhouse, Chairman of the St. Louis Regional Freightway’s Policy Committee. Hillhouse is the former Executive Director of the East-West Gateway Council of Governments and is currently a dean and professor at Missouri Baptist University.

Mike McCarthy, President of Terminal Railroad Association of St. Louis and Chairman of the Needs Analysis and Freight Development Committee for the St. Louis Regional Freightway, underscored the truly unique effort underway to identify and advocate for priority projects in the region. “This committee is just not transportation folks; it is government officials, people from academia, commercial real estate, workforce development and more. Seldom do we see such a diverse group come together for a common purpose, and I know we’ll be able to capitalize on that.”

“When it comes to marketing St. Louis, we have been out jazzed and out pizzazed. It’s time that we stand up and recognize the tremendous assets we have, and tell the world about them,” said Dennis Wilmsmeyer, Chairman of the St. Louis Regional Freightway’s Marketing Committee and Executive Director of America’s Central Port.

The St. Louis Regional Freightway is specifically tasked with coordinating freight activity and attracting and expanding the industrial business market in the bi-state region.  Through public-private partnerships, its mission is to accelerate regional economic growth through job growth in manufacturing and logistics while optimizing the prime multimodal infrastructure assets in the City of St. Louis and the seven surrounding Missouri and Illinois counties.  Those assets include six Class I railroads; the third largest inland port with lock-free access on the Mississippi River to and from the Gulf of Mexico; two international cargo airports with available runway capacity, and four interstates providing one day drives to cities such as Kansas City and Chicago. The region also offers close proximity to manufacturing suppliers and well-positioned and available industrial real estate.

“Those assets, augmented by a sizeable, multi-faceted workforce with expertise in the manufacturing and logistics fields, combine to provide a unique mix of competitive advantages unavailable anywhere else in the country,” said Bi-State Development President and CEO John Nations. “All the ingredients are in place; the task at hand now is to make sure the right people are aware of them.”

To that end, the St. Louis Regional Freightway is providing assistance to site selectors, manufacturing, logistic and multimodal transportation companies and their service providers, and serving as a prime resource for manufacturing and logistics companies considering the St. Louis metro region for a new or expanded operation.  To foster future growth, the St. Louis Regional Freightway also is setting multi-modal transportation priorities through regional collaboration with public and private sector freight industry leaders.  Those priorities are aimed at enabling the supply chain to work effectively for the region’s manufacturing and logistic industries and to support their immediate and future growth and success.

The St. Louis Regional Freightway was established as a recommendation from a 2013 regional freight study and was approved by the region’s metropolitan planning organization East-West Gateway Council of Governments.  In September 2014, East-West Gateway voted to have Bi-State Development (BSD) lead the new regional freight district, setting the stage for the launch of the St. Louis Regional Freightway. The April 27th launch event was sponsored by BNSF Railroad and Bi-State Development.

Table of Experts: The State of Tourism in the St. Louis Region