“The new Metro Station at Cortex and the first quarter mile section of the Chouteau Greenway are two transformative projects that connect all kinds of people from all walks of life to exceptional job opportunities. This project is about connecting all kinds of people to over 13,000 jobs in the city’s central corridor. It will bring new business, new jobs and new opportunities to the region.”

The St. Louis region is quickly becoming one of the nation’s innovation leaders. It features a long list of successful startup businesses, Fortune 500 companies and lots in between. The Cortex Innovation Community, located just a few miles west of downtown, is home to more than 350 companies and 4,300 tech jobs. When fully implemented, the Cortex master plan projects $2.3 billion of construction and more than four-million-square-feet of mixed-use development.

On Tuesday, July 31, at 10 a.m., Bi-State Development celebrated a historic addition to the MetroLink line—the Cortex MetroLink station. The station celebrated with a grand opening at 4270 Duncan Ave., along with the dedication of the first quarter-mile section of the new Chouteau Greenway. When the Greenway is complete, it will connect people, neighborhoods, regional institutions and communities via green space—spanning from Forest Park to the Gateway Arch—as well as points north and south. 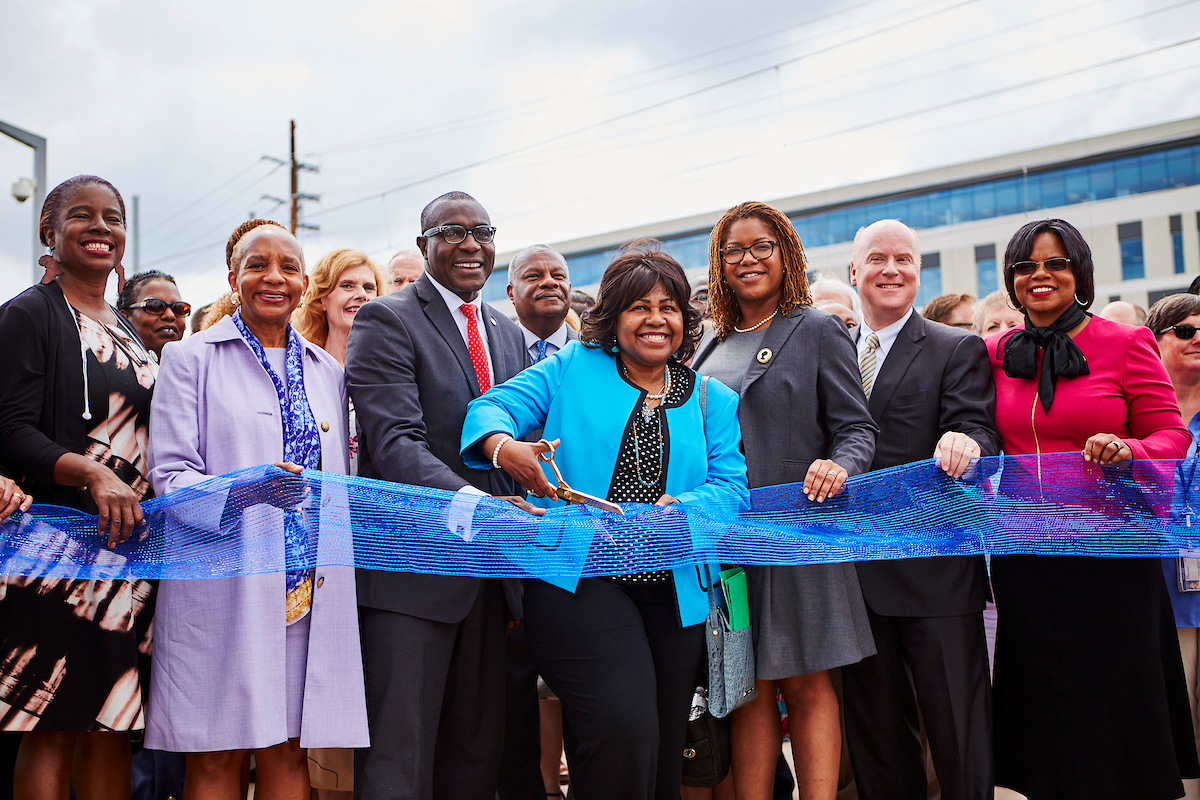 Cortex was founded in 2002 by Washington University in St. Louis, BJC Healthcare, University of Missouri – St. Louis, Saint Louis University, and the Missouri Botanical Garden to capture the commercial benefits of university and regional corporate research for St. Louis. The founders of Cortex had the foresight to know that safe, reliable and accessible transit would need to be part of their long-term strategy for tech innovation. They viewed public transportation, not only as a way to get to and from work, but as an essential component of a successful economic development strategy. To that end, the Cortex leadership team, together with Bi-State Development, developed an innovative public-private partnership (P3) funding strategy to finance a new infill MetroLink station—between the Grand and Central West End stations. On July 31st, 2018, it became the 38th station on the current light rail system—located between Boyle Avenue and Sarah Street. The project will also extend the platform at the Central West End MetroLink Station, which has the highest ridership on the entire alignment.

“The [Cortex Metro Station] is all about revitalization and innovation in our city. This project is a perfect example of how the private sector and public officials in our city are working together,” said Michael Butler, Missouri State Minority Caucus Chair. 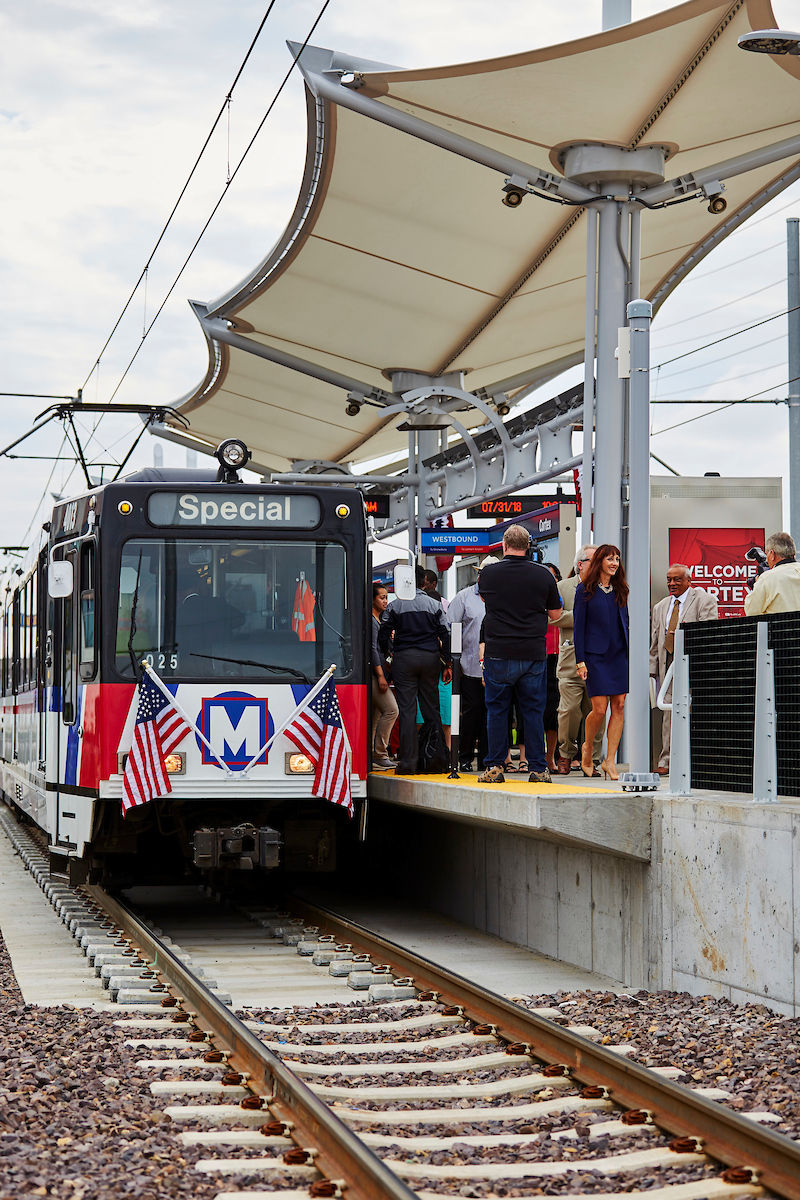 “The new Metro Station at Cortex and the first quarter mile section of the Chouteau Greenway are two transformative projects that connect all kinds of people from all walks of life to exceptional job opportunities,” said U.S. Congressman William Lacy Clay, Jr. “This project is about connecting all kinds of people to over 13,000 jobs in the city’s central corridor. It will bring new business, new jobs and new opportunities to the region,” he continued.

Lasting change, for the future of our regional economy, is happening on the grounds at the Cortex Innovation Community. “This development is a game changer here in the city of St. Louis. According to the American Public Transportation Association, there are 30,000 jobs supported with every $1 billion spent on transportation,” said Missouri State Senator Jamilah Nasheed.

Home to more than 350 companies, 4,300 tech jobs, Cortex is 1.9-million-square-feet of bright minds, steaming cups of coffee and late nights. Cortex has grown from the very first patent to more than $650 million of investment—a key driver of the St. Louis regional economy. When fully implemented, the Cortex master plan projects $2.3 billion of construction, more than four-million-square-feet of mixed-use development (research, office, clinical, residential, hotel and retail), and 13,000 permanent technology-related jobs. Microsoft alone is creating 150 jobs and is investing over $50 million in local jobs, facilities and software grants with its Microsoft Technology Center in Cortex. A critical part of that vision involves transit.

The addition of the Cortex MetroLink station a key component of creating a car-optional environment for both current Cortex employees and for attracting new talent. However, the need for the Cortex MetroLink Station extends far beyond the demand from employees and potential employees. It has much to do with global perception. Cortex leadership frequently gets asked by people around the globe about public transportation options in the region, since Cortex is competing on a global scale—where quality public transit is the norm. One company from Northern Europe looking at the space shared that 90 percent of their employee base travels to work every day using public transportation modalities. Additionally, both employees and company leadership share sustainability goals that are met through the use of transit. 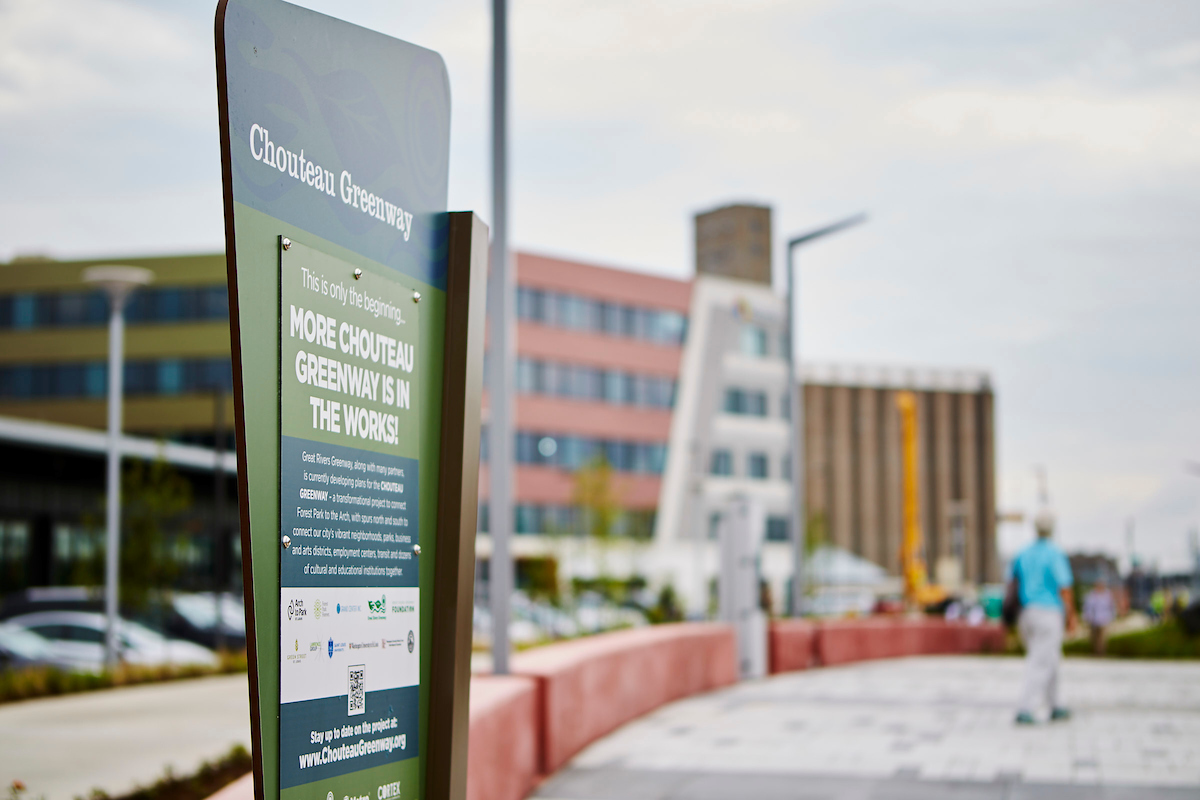 A Platform for New Ideas

Cortex is designed around rapid expansion—it’s a 200-acre innovation community of creative entrepreneurs, which includes all the recreational and cultural benefits that surround the district itself. In the last eight years, Cortex has gone from 35 companies to more than 350 companies today. They have done that by building density—which allows for enhanced collaboration between and among tech entrepreneurs. Cortex intentionally designs spaces and places where people can bump into each other in unintentional ways. It’s fundamentally a platform for companies, individuals, and ideas—a platform for the intersection of multiple technologies. And it’s at those intersections of different technologies that innovation happens.

The Cortex MetroLink Station is just the beginning of the transit transformation in the City. In July of 2018, BSD celebrated the completion of the first quarter-mile section of the Chouteau Greenway—just north of the Cortex Station between Boyle and Sarah Avenues. This is the first of a five-mile stretch of greenway which, when completed, will connect the Gateway Arch to Forest Park—ensuring that St. Louisians can best leverage their community, institutional, and private assets through this shared urban infrastructure.

“We are not just about connecting Forest Park to the Arch, but about creating access to communities north and south. Our goal is to create a community of diversity, unity and common ground by providing everyone access to cultural events, hospitals and parks,” said Susan Troutman, CEO, Great Rivers Greenway.

Envisioned as the “backbone” of the central city area—with spurs to the north and south—the Greenway will provide junctures for other connections to communities, institutions, and natural resources in and around the core of St. Louis.

More Stories From The Region 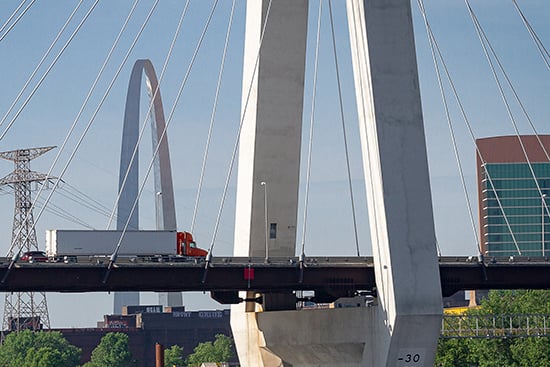 With an expanding freightway, there is increasing demand for drivers in the region.

With lots of opportunity, low costs of living and so much to do, St. Louis is the smart choice for truck drivers. 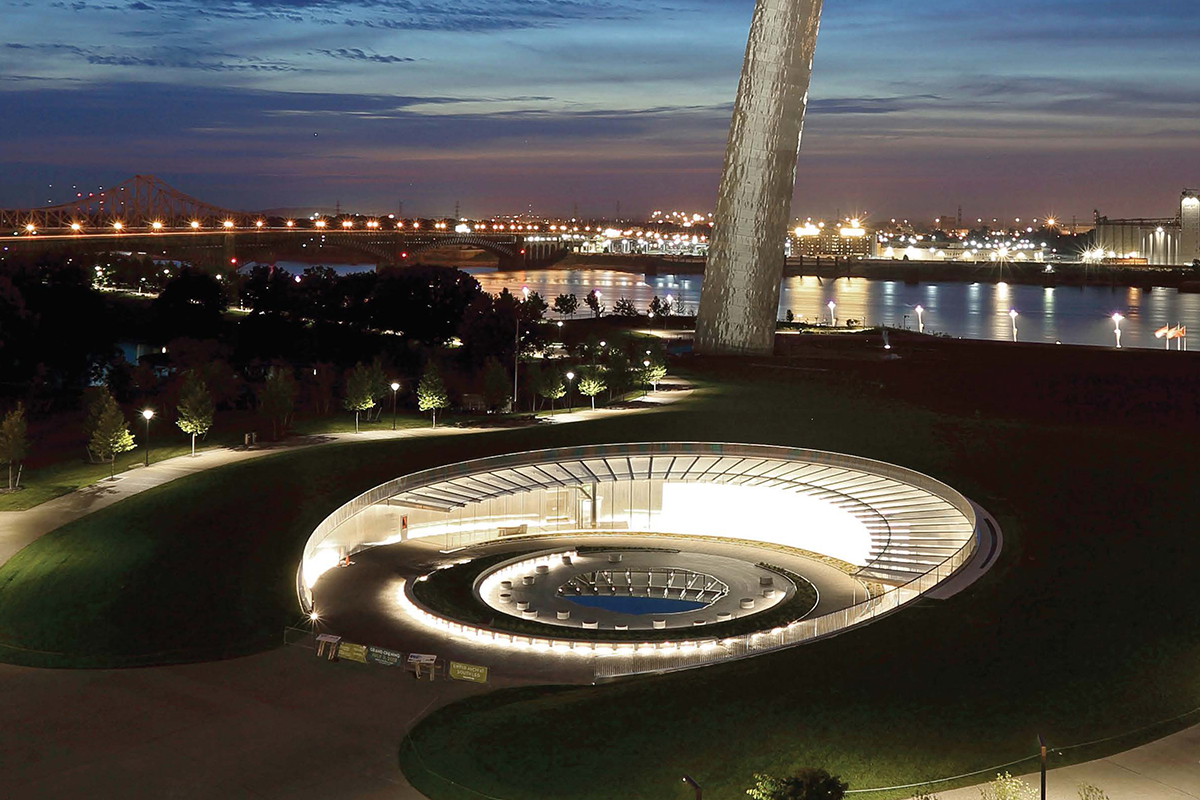 MUSEUM AT THE GATEWAY ARCH

Work is completed on $380 million renovation

Not only is the Arch the “Gateway to the West,” it’s also the Gateway to tourism in Missouri. 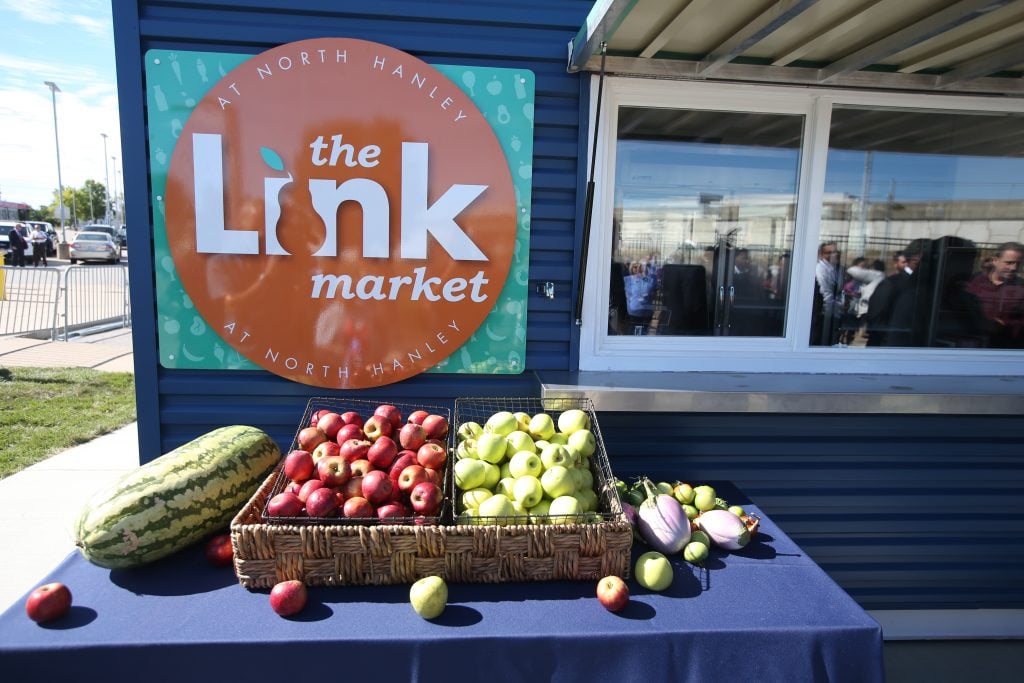 The Research Institute works to introduce fresh food where it has vanished.