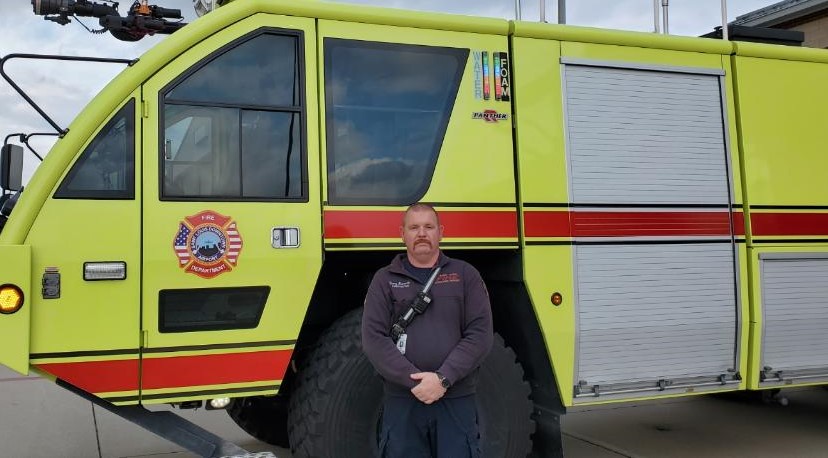 Terry Bowman works on the front line at one of Bi-State Development’s enterprises as a Firefighter-Aircraft Rescuer at St. Louis Downtown Airport in Illinois. Terry and the airport fire department team have been on the job every day during the pandemic to assist the pilots who fly in and out of the airport. Terry has been a part of the Airport’s Fire Department (AFD) since 2008, and he and the fire department team manage any emergencies that could prevent or hamper a plane from taking off or landing properly. The emergencies, which come in through the control tower, are sent to the AFD to respond to. They can include landing gear issues, problems with an engine, and other problems that may occur with the helicopters, single and twin-engine planes, charter jets, and military aircraft that fly in and out of our airport on a regular basis. Twice a day, the fire department team conducts visual inspections of the runways and taxiways, ensures all of lights are working properly and removes any obstructions so the pilots and passengers have a safe experience.

Some of you know Terry as your CPR instructor, because he taught lifesaving classes for us from 2012 to 2019. Terry really enjoys his job and responsibilities because they involve assisting others. He says, “I just love being able to help people.” He also oversees the tours of the airport that are booked by schools and other groups.

Terry also serves as a volunteer firefighter for the City of O’Fallon, Illinois. That is where his firefighting career began 18 years ago. Before joining BSD, he worked at the MidAmerica St. Louis Airport in Mascoutah, Illinois.

When Terry is not working as a firefighter and aircraft rescuer, he looks forward to spending time with his two children.