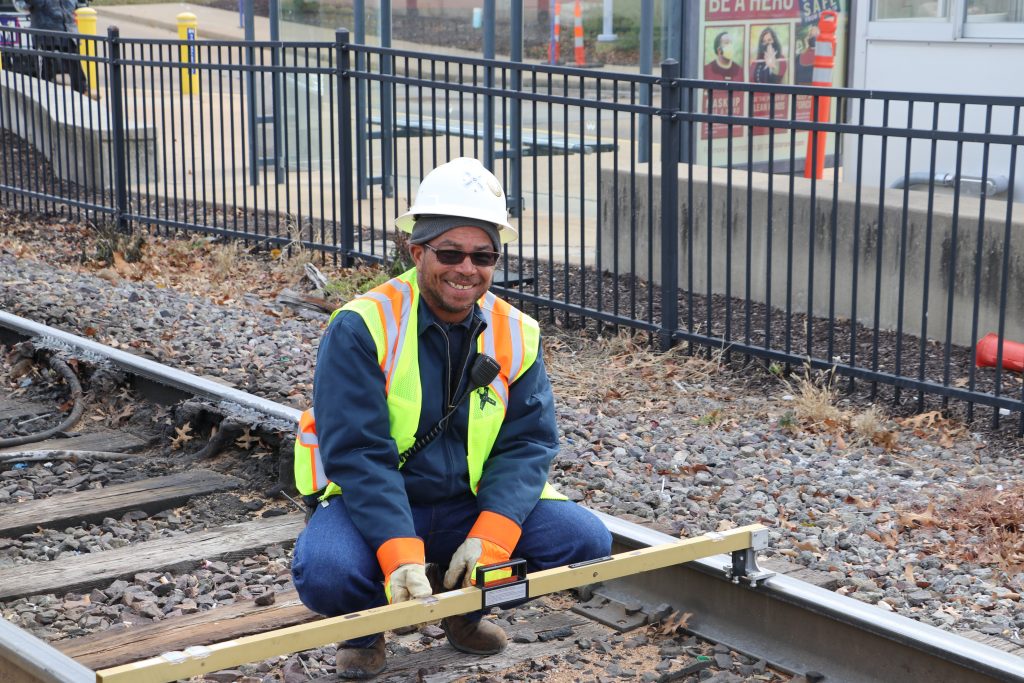 Eugene (Geno) Kershaw III, a Track Maintainer III, works in the Rail & Right of Way Maintenance Department at the Central Facility. Eugene has been with BSD for 12 years and his primary responsibilities include ensuring the MetroLink tracks are safe for service and clear of any obstructions so the trains can safely move our customers.

Obstructions can include track defects such as a broken rail, loose track bolts and fastenings, displaced ballast rock, a low/fallen tree limb, or even standing water on the rails. Whenever needed, Eugene visually inspects the tracks by either walking along the alignment or by riding on the train to record and report his findings. If necessary, he and his fellow track maintainers will address any issues that arise so that there are no disruptions to service. If there’s a major issue, track department management will assess the situation and implement a permanent solution by enlisting the help of the night crew for tasks that have to be completed while no trains are running.

Eugene really likes his job because of his railroad expertise and the freedom to work outdoors. He’s even served as one of our volunteer Ambassadors for Fair Saint Louis and other special events.  His work ethic is a possible example for his team members: “Take your time and be safe whenever you do your job.”

Prior to joining BSD, Eugene was an 18-year veteran foreman at RailWorks Track Services. Outside of work, he likes to ride his motorcycle, fish and hunt. Eugene is also proud of his children and grandchildren, especially his son who is about to retire from the United States Marine Corps.

Scam of the Week: Exploiting the Coronavirus - Phony Form from HR

Scam of the Week: Exploiting the Coronavirus – Phony Form from HR