Julián Castro, Secretary of the U.S. Department of Housing and Urban Development (HUD), praised Bi-State Development for its achievements and the investments it has made to support the St. Louis region.

Castro visited Bi-State Development’s newest transit investment, the North County Transit Center in Ferguson, Missouri, on December 12. The HUD Secretary was welcomed to the transit center by John Nations, President and CEO of Bi-State Development, and Ray Friem, Executive Director for Metro Transit, who gave him an overview of the work and progress being made by Bi-State Development, its enterprises and its partners in the St. Louis region.

“The future is going to belong to cities that are doing what you are doing, which is connecting all of the dots of economic opportunity and quality of life,” Castro said. He emphasized the importance of investments like the North County Transit Center to ensure that the full potential of economic advancement and growth is realized. “It’s not enough to create the job opportunity, but you also have to connect folks to that job opportunity,” said Castro. “This center strikes to the heart of that.”

The new transit center, which opened on March 14, 2016, allowed Metro to completely redesign MetroBus service in North St. Louis County – one of the region’s fastest growing transit markets – in order to provide faster and more frequent MetroBus service. The transit center also includes the highest level of passenger amenities and features, and can easily adapt to changing transportation needs such as electric buses and 60-foot transit vehicles.

“The North County Transit Center is part of how we are redefining and reinventing public transit in the country,” Nations said. “So much so, in fact, that the U.S. Department of Transportation recognized us this summer as a showcase on what is possible in managing transit assets.” 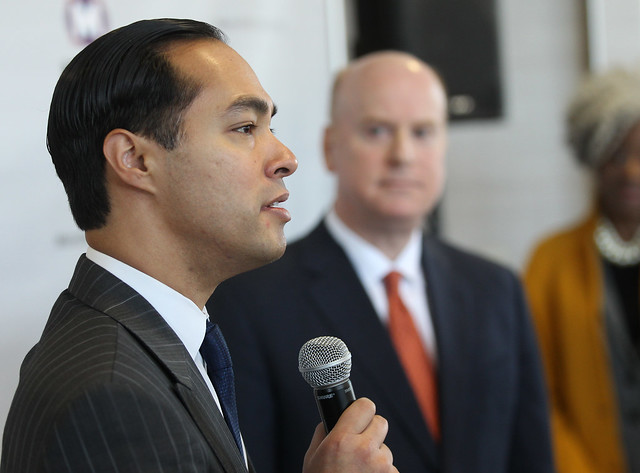 Nations told the HUD Secretary it goes beyond transit efficiencies. “It’s about how to improve the lives of the people and the communities we serve.”

Bi-State Development is doing that through grants awarded to another one of its enterprises, the Bi-State Development Research Institute.  In November, the Research Institute was awarded a $584,000 grant to support the development of food kiosks at two MetroLink stations in St. Louis County located in areas identified as food deserts. It was also awarded a grant of nearly $1 million from the Federal Transit Administration to fund the operation of mobile medical units to provide primary health care screenings for Metro riders and residents living near three Metro transit centers in North St. Louis County.

“I like this idea, I have not heard of it before,” Castro said. “People want to go see the doctor, but it can be so inconvenient that they don’t go and put off something that they really need to get checked out. To put it where they can go in the morning, after work or during the day —  makes a lot of sense.”

Castro came to St. Louis to announce that the city will receive a $29.5 million federal HUD grant to revitalize and redevelop near North St. Louis.

By Kelly Schneider in Procurement Notice of Awards on December 16, 2016