The top leader at the Federal Transit Administration (FTA), Acting Administrator Carolyn Flowers, received a special update on federally-funded Metro transit projects in the St. Louis region during a tour led by Metro and Bi-State Development on November 1. Flowers said she was impressed by what she saw the Bi-State Development Metro transit enterprise doing with the federal funds.

“It’s clear that the St. Louis region and Bi-State Development value transportation, people and quality of life,” Flowers said. “The projects I saw in St. Louis demonstrate many models of efficiency that expand transportation options – and opportunities – for residents.” This was Flowers first visit to St. Louis.

The tour provided a comprehensive look at many transit projects planned or underway in the region.

“The FTA has been a valuable partner to Bi-State Development’s Metro transit division, and it was a privilege to welcome Administrator Flowers and her colleagues to St. Louis so that they could see the federal dollars they have entrusted us with at work,” said Bi-State Development President and CEO John Nations.

The tour began at the Civic Center Transit Center, located at 14th and Spruce Streets in downtown St. Louis, where construction started in April to expand one of Metro’s busiest transit hubs. When completed late next year, the transit center will provide space for 18 MetroBus bays, two Metro Call-A-Ride bays, have the capacity to accommodate 60-foot articulated buses and provide access for Amtrak and Greyhound riders who arrive and depart from the adjacent Gateway Multimodal Transportation Center. The $10.5 million transit center will include digital messaging boards, a security sub-station, public restrooms, an indoor waiting area and concessions. Ray Friem, Metro Transit Executive Director, noted that 80 percent of the project is being paid for with FTA funding.

The next stop on the tour for the Acting Administrator was the Laclede’s Landing MetroLink Station to view the work completed on the CityArchRiver project. Metro received $1 million in federal grant money to raise Leonor K. Sullivan Boulevard to minimize the flooding impact from the Mississippi River on the St. Louis Riverfront. 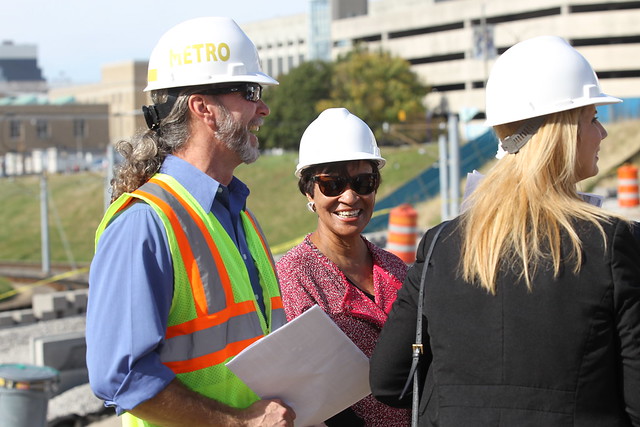 While on the light rail train, Metro officials briefed Flowers about the recently completed Eads Bridge Rehabilitation Project. The $48 million project, which was 91 percent supported by federal funds, will extend the life of the 142-year-old bridge another 75 years. MetroLink maintained service across the bridge, the only MetroLink connector between Illinois and Missouri, throughout the four-year project with no significant delays to riders. Flowers got a close-up look at the work accomplished as part of the rehabilitation, which included the stripping of many layers of paint, rust and corrosion down to the base metal; the replacement of failing bridge components and the application of a protective coating to the landmark bridge.

The group also toured the North County Transit Center in Ferguson, Missouri, constructed to accommodate a new MetroBus service plan for one of the region’s fastest-growing transit markets. The new center, which opened in March, features more frequent and direct service, faster transfers, and connections to more destinations. Eighty percent of the $10.28 million dollar project was paid for with federal funding.

Friem said the mission to deliver a great customer experience is part of what makes the North County Transit Center such a key asset in the Metro system. “We asked, where can we have an impact? Where can we help the most riders?” said Friem. “Input from Metro’s Planning Department showed that was right here.”

“Today was a great opportunity to look at some of the projects that Bi-State Development and other St. Louis agencies have completed in partnership with the FTA,” Flowers said. “It is so rewarding to see projects such as the Eads Bridge renovation and new bus facilities that demonstrate how cooperation works to improve access to public transportation for residents throughout St. Louis and the region.”

Nations pointed out it is not just about moving people from point A to point B. It is more than transit service. It is about addressing quality of life issues. For example, another Bi-State Development enterprise—the Bi-State Research Institute—was recently awarded grants including nearly $1 million from the FTA to provide mobile health stations at MetroLink locations in North St. Louis County and another grant will provide new access to healthy food at transit locations in “food desert” areas of the county. “At Metro, we’re not just looking at how we move people, but how do we serve them and make it a better experience,” Nations said.

For the final stop on the tour, Metro took Flowers to what will become the St. Louis region’s newest MetroLink station — an infill station between the Central West End MetroLink Station and the Grand MetroLink Station in the Cortex Innovation Community near Boyle Avenue in St. Louis. The Central West End Station is the busiest MetroLink station on the light rail system. In July, Metro began design work for the station, which is the result of a unique private-public partnership and federal funding representing a $10.3 million TIGER grant from the U.S. Department of Transportation. The finished project will also include an expansion of the Great Rivers Greenway bike path and an extension of the Central West End MetroLink Station platform. Construction is set to begin in 2017, with completion targeted for 2018.

Mike Sullivan, COO and General Counsel for Cortex, told Flowers the Cortex Innovation Community, located north of Boyle Avenue and the MetroLink tracks, is home to 250 companies and has seen 725,000 square feet of new development supporting 4,100 jobs. When fully built, it will represent a $1.4 billion investment. He stated the new MetroLink station is critical to providing the type of environment that will attract the millennial workers needed for future growth.

Flowers commented that the overall approach to the Cortex Innovation Community is exactly the type of investment that will help St. Louis to rebuild its population base. When asked what she thought of the development overall, Flowers stated, “I have to use a word I’ve used already today – impressive.”

By Internet Administrator in Procurement Notice of Awards on November 10, 2016

Bi-State Development to Host Virtual Board Meeting on November 20